The Rev. Dr. Willem Simarmata is the Ephorus (similar to Presiding Bishop) of the Huria Kristen Batak Protestan (HKBP), the Indiana-Kentucky Synod’s global companion church in Indonesia. With more than 4 million members, the HKBP is the largest Protestant denomination in Indonesia. Ephorus Willem is committed to strong and fruitful relationships with other faith communities, including Muslim communities, which enable working together for the common good. In May 2015, the Ephorus was also elected Moderator for Christian Churches of Asia (CCA). CCA includes more than 100 church bodies from 15 countries that work together on Christian unity, joint mission, Asian contributions to Christian thought and worship, effective Christian response to the challenges of the changing societies of Asia, care of creation, and interfaith relationships.

The Rev. Izani Bruch serves as the first bishop of the Evangelical Lutheran Church in Chile (IELCH). Previous to Bishop Izani’s election, a “presiding pastor” led this global companion church of the Indiana-Kentucky Synod. The IELCH has about 3,000 members who are part of a dozen congregations spread across the southern two-thirds of Chile. Bishop Izani leads the IELCH from a deep commitment that the role of faith communities “is to be a voice that announces the gospel of love and mercy revealed in Jesus Christ, fighting for justice and the rights of all, especially the most vulnerable in our society.”

Andre Gingerich Stoner is the director of Interchurch Relations and Holistic Witness for Mennonite Church USA, working from denominational offices in Elkhart, Indiana. In this role he helps cultivate relationships between Mennonites and others in the broader body of Christ, with the conviction that we have gifts to receive from and offer to each other as we seek to be faithful to Christ and witness to God’s reconciling love in the world. Andre and Kathryn Johnson (see below) will help us learn about and live into the mutually transforming steps of repentance, forgiveness and reconciliation that have been happening between Mennonites and Lutherans, both in the US and at the international level through the leadership of the Lutheran World Federation and Mennonite World Conference.  Andre and his family live in South Bend as intentional neighbors with four other households. Before this current assignment he served on the pastoral team of Kern Road Mennonite Church here in South Bend. 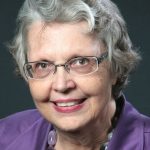 Kathryn Johnson, director of ELCA Ecumenical and Inter-Religious Relations, was most recently Paul Tudor Jones Professor of Church History at Louisville Presbyterian Theological Seminary in Louisville, KY, and has served five years in Geneva as the Lutheran World Federation’s Assistant General Secretary for Ecumenical Affairs. During her time with the LWF, Kathryn helped prepare for the 2010 act of reconciliation between Lutherans and Mennonites. She continues to work for  the growth of relationships between the ELCA and the Mennonite Church, as well as other ecumenical relationships, as we approach the 500th Reformation anniversary. When she was named to her current role with the ELCA Kathryn said, “Working for Christian unity has been one of the deepest joys of my vocational life.” 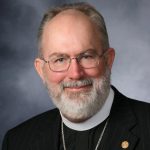 As the son of a career Navy enlisted man he lived and went to school in Ohio, Pennsylvania, Michigan, Tennessee, and Washington.  His “call to ministry” came when his kindergarten teacher at Trinity Lutheran School, Marysville, Ohio, asked who wanted to be a missionary when they grew up.  His hand went up and the seed of being a pastor was planted.  Encouraged by family and local congregations, he graduated from Pacific Lutheran University, Tacoma, Washington, with a degree in Communication Arts.  He then attended Concordia Seminary, St. Louis, Missouri, until the creation of Christ Seminary-Seminex in 1974.  Graduating from Seminex in 1975, his first call came from four families in the San Juan Islands in Washington to start an independent Lutheran congregation.  The congregation was organized in 1976 and became a member of the American Lutheran Church in 1977.  He was ordained in June of 1978.

Chris is married to DeDe (Finlayson) Boerger.  They have two grown children, John and Mary, and four grandchildren.   DeDe serves as a volunteer Faith Community Nurse two days per week in the Lutheran Center.   Chris’ hobbies include raising and showing dahlias, reading, and being a fan of baseball, football, and college basketball.  His interest in constitutions and parliamentary procedure began in a class on Robert’s Rules of Order in college.  He served as parliamentarian at district conventions and synod assemblies prior to his election as bishop.